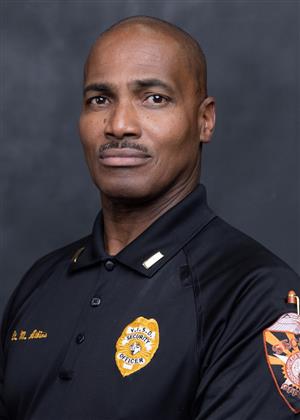 Lieutenant Mike Atkins has worked in the Security Industry for over thirty-five years. He is currently the Security Coordinator where he oversees eight sergeants from all seven feeder patterns as well as the District’s dispatch center. He has held security positions as an officer, sergeant, and lieutenant. Mr. Atkins previously served as the Chief of Security at the El Paso Housing Authority. Mike has been employed with the Ysleta Independent School District for the last fifteen years. Lt. Atkins was previously assigned to Del Valle and Hanks High Schools. Mr. Atkins studied criminal justice at Mansfield College. He is also a state-certified handcuff and baton instructor.

Lt. Atkins has been married to his wife Vielka for twenty-seven years. They have two children and two granddaughters. Mr. Atkins is also a preacher. He holds weekly mass every Saturday morning. Mike has proudly been teaching and preaching the word of God since he was eleven years old.