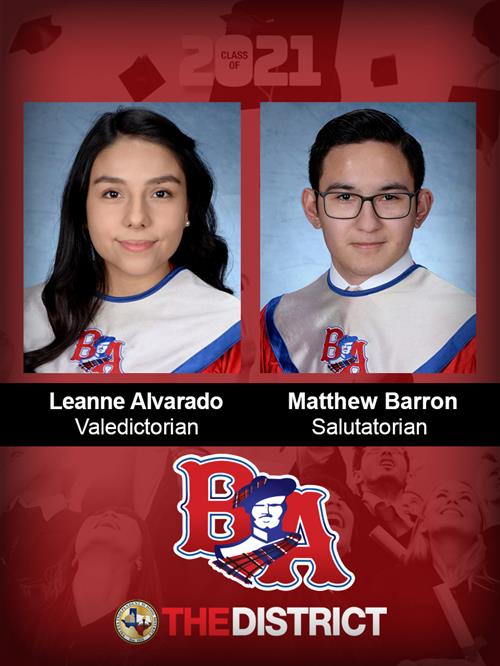 Matthew Barron is this year's class of 2021 Salutatorian.  He spent his high school years as a band member and was inducted into NHS his junior year. Additionally, he received the Jungle Tiger Award and was a recipient of the ROSE Award twice. After high school, Matthew will be attending UTEP. He would like to study Biology with a Medical concentration. He one day hopes to become a Medical Examiner and preserve the legacies of those who have perished or passed on.

Leanne Alvarado is the school's Valedictorian.  She was in the Licensed Vocational Nursing program. She held the class office position as Vice President and was also involved in HOSA, Academic Decathalon, High Q, Art, gymnastics, and National Honor Society. In addition, Leanne supported the KAOS soccer team as an assistant coach and gained leadership and debate skills through her time with the Hugh O Brian Youth Leadership organization and the Speech and debate team. She also accelerated her academics by participation with the Math team and enrollment in OnRamps, AP, and Dual Credit.

Leanne's plans after graduation are to complete the summer semester of the licensed vocational nursing program and obtain her nursing license. Thereafter, she plans on attending Harvard University to pursue a pre-medical track. After that, she hopes to attend medical school to become a Neuropsychiatrist and expand healthcare access to low-income and minority communities.

Recipients of the Highlander Awards went to the following: